Here is a close-up shot of the cake mirroring the book cover to BABAYLAN: FILIPINOS AND THE CALL OF THE INDIGENOUS edited by Leny M. Strobel: 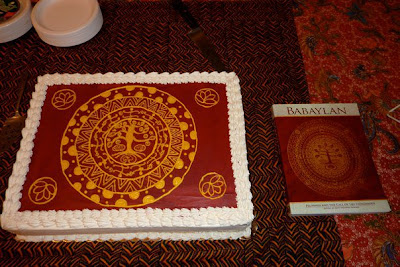 And here are some of the anthology contributors marrying each other to cut cake (our postures remind me of the point in wedding receptions where bride and groom hold the cutting knife together...). I’m in pink feeling slightly confused as I’m sensing an Igorot head-hunting axe in my hand instead of a cake-cutting knife (I think “head-hunting” is a “Biro” pun). 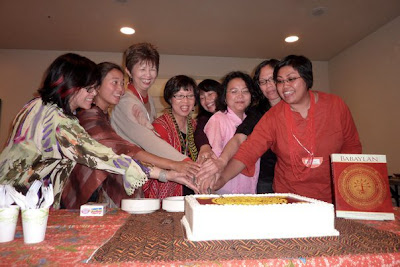 All the festivities move me to remember, and display, my lovely German Shepherds Achilles (left) and Gabriela with my guapo son Michael. My female dog is indeed named after Gabriela Silang, the first woman general of the Philippines who had battled Spanish colonialism): 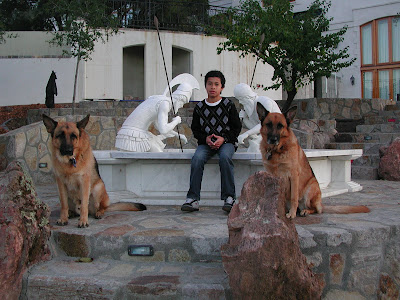 Aren't they lovely! Anyway, the dawgs have a message about the cake made to mimic the book cover of Leny Strobel's Babaylan anthology:

CAKE IS APPROPRIATE! CAN WE HAVE SOME!

Well, no, the dogs aren't allowed cake (allergies). But they still feel

Why? Because the cake was eaten by the attendees of the Babaylan conference. And when we are talking about indigenization, aren't we talking about going back into the body for the memories contained therein? Blood memory, that is. The contributions in the Babaylan anthology came from the body, and with cake, returns to the body!

The dogs would know about ingrained memory. Both are 100% domesticated and have received extensive dog-training. But when a rabbit shows its cute ears above the grass lining the mountain where we live, Gabriela takes off and no amount of "Stop! Stop!" will cause her to halt! The centuries of history programmed into her sinews just take over.

The body remembers. When we proceed towards rediscovering our indigenous nature, we don't proceed forward or backward. We just become what we already are. So go forth now and eat cake! And here’s Gabriela when she’s resting from chasing wabbits; her Momma cats Artemis and Scarlet keep watch--that's right, through Kapwa we are all the same species:

This, of course, relates to poetics (a ragged segue but it’ll do) and speaking of Gabriela Silang, I wrote about her living a 21st century life in Menage A Trois with the 21st Century. She was one of two women for whom I imagined a contemporary life, the other being Enheduanna, “the earliest author and poet in the world that history knows by name.”

For both Gabriela Silang and Enheduanna, the issue of persona poems came up in some discussion with other poet-critics shortly after the book’s release in 2004. At the time, the discussion was complicated for me, because I didn’t think that imagination and persona really captured what I was doing in order to write poems on--rather, by--these women. After the Babaylan conference, I have a better clue on articulating my process. Basically, I’m not pretending to be these two women or imagining what it would be like to be these two women. I’m channeling them….I channeled them. I became them.

Both series of poems were written—and I think this significant—fairly quickly. I always felt like I was in a fever when I wrote both series, quite often looking around my immediate environs for words that I could lift (e.g. from what magazines happened to be about) to manifest the energy I was feeling—it was almost as if words couldn’t come quickly enough. Well, my mother (who attended the Babaylan conference with me) explained just a few days ago that when anitos speak to humans, the humans often end up sick in a fever--Mom witnessed several occasions of this in the Philippines. I found that interesting as I often describe "the poem taking over" my hand writing the poem whenever I get in a fevered state of creating poems.

Not necessarily contradicting the above is my understanding, post-Babaylan conference, that I was in those gifted spaces when poems were rushing out easily. That is, I believe I was in what Filipino novelist N.V.M. Gonzalez* called “sacred time and sacred place” where, among other things, creativity runs unfettered. And, given that such is the place of primordial oneness with all creatures in all time, then I was Gabriela Silang when I wrote the Gabriela Silang poems, and likewise with Enheduanna. I wasn’t imagining their personas. At the particular moments of creativity, I was/am them.

I remember now one conversation with a would-be critic several years ago; she was critical of my approach that seemed to be so focused ultimately on me (no doubt she was reflecting her times which sometimes included what I felt was an often too dogmatic focus on the "I" versus the "non-I"). I wish I had known then about Kapwa, that what I was feeling-knowing then was Kapwa which, as a literary strategy, also encourages the transformation of autobiography into a biography of a “We”. These, too, arose in other books, including POST BLING BLING and The Light Sang As It Left Your Eyes: Our Autobiography, as well as THE BLIND CHATELAINE’S KEYS: Her Biography Through Your Poetics. As regards The Light Sang…, the title is very explicit in manifesting this concept, and THE BLIND CHATELAINE’S KEYS is a book presumably authored by me but where all of the text was written by other people. The conceptual underpinning to these books, however, occurred before I became conscious of the indigenous knowledge/practices that I'm now learning.

I’m not scared to seem crazy as I say all this—because there exists an object that comprises my proof. There is the book, Menage a Trois with the 21st Century. If you wish to check the authenticity of what I’m saying, HAVE AT IT! I stand by the energy that I feel still surfaces from its pages.

And it is energy. To re-indigenize is not, in terms of my engagement with the issue, one of co-opting much of the cultural artifacts of indigenous times (though of course I also enjoy seeing others in colorful gorgeous “tribal” wear); as I was telling Barbara Jane Reyes (whose forthcoming book DIWATA I’m so looking forward to seeing) this week, I won’t be donning tribal garb—I’ll still be dressed in Manhattan black or St. Helena farming wear (the latter being mostly my father’s shirts). It’s about the wholistically-oriented, shared-Life ( kapwa) energy that permeated pre-modernity—it’s about tapping into that energy.

Simon J. Ortiz, in his essay “Song, Poetry and Language,”** says something similar (and remember that indigenous transcends nationalism so that what he says based on indigenous Native American culture can apply when discussing pre-colonial Philippines):

Oftentimes, I think we become convinced of the efficiency of our use of language. We begin to read language too casually, thereby taking it for granted, and we forget the sacredness of it. Losing this regard, we become quite careless with how we use and perceive with language. We forget that language beyond the mechanics of it is a spiritual force.

When you regard the sacred nature of language, then you realize that yo are part of it and it is a part of you, and you are not necessarily in control of it, and that if you do control some of it, it is not in your exclusive control. Upon this realization, I think there are all possibilities of expression and perception which become available.

If interested, there are some reviews available on line of Menage a Trois with the 21st Century:

Nicholas Manning's review of The Light Sang As It Left Your Eyes: Our Autobiography also may be of interest; it's published by Cordite and available HERE.


_________
* The summary of N.V.M. Gonzalez's mythic "sacred time and sacred place", as well as the discourse on the indigenous Filipino trait of "feeling-as-knowing" are from KAPWA: THE SELF IN THE OTHER—WORLDVIEWS AND LIFESTYLES OF FILIPINO CULTURE-BEARERS by Katrin De Guia (Anvil Publishing, Pasig City, 2005)

i love how you weave all these threads together! and actually you married 15 women, the others were only absent in the body but present in spirit:-)) and that is why we took home some cake for them...

Hi Leny,
after grinning over your wedding reply, I remembered the "Poems Form/From the Six Directions" project (there's a link on the sidebar, Readers)...wherein I "married" Poetry.

With hindsight, a sign again to, from the myth, stand on ground and touch the sky, thereby being at one with all of the world, in all of time.


On another matter, we met long before you released your first decolonialism book, Leny. It's wonderful to see the fruits of your persistent labors!