I am called “Balikbayan” because the girl in me is a country of rope hammocks and waling-waling orchids—a land with irresistible gravity because, in it, ... forget the world’s magnificent indifference.
-cited in Aileen Ibardaloza's review of THE THORN ROSARY

This blog is one of the effects of having just attended the very resonantly effective Babaylan Conference sponsored by the Center for Babaylan Studies at Sonoma State University, April 17-18, 2010.

Among other things, the Conference--specifically with its focus on Indigenous Continuance*--forced me to finally pay attention to Calls I've been receiving for over a decade now from the Babaylan anitos.** Their calls began early, but their silky ululations started to become discernible to my diaspora-ed mind in the late 1990s when I and Nick Carbo were working to create what would become BABAYLAN: AN ANTHOLOGY OF FILIPINA AND FILIPINA AMERICAN WRITERS, the first international anthology of Filipina writers published in the United States. This anthology was my first introduction to the word "Babaylan". But after the anthology, I confess to not focusing much on these historical/archetypal figures who were community leaders from pre-Spanish Philippine history who served as warriors, teachers, healers and visionaries.

I didn't focus on the Babaylan, but she clearly wanted to dance with me; with hindsight, I see their presence in many poems I've written over the past decade, and specifically note them lurking in poems I wrote as a newbie-poet (as regards the latter, I was very unhappy in my pre-poetry "career" and it was almost as if the anitos converged robustly and enthusiastically--as if they'd long been waiting for my move--as soon as I quit banking for poetry).

Among other signs is, within my home, a separate building that I was moved years ago to name "Babaylan Lodge". The lodge was intended to be my writing studio. Having said that, I've ignored its existence for years and basically office-d from my laptop (the latter making sense to me since I've long thought--or desired-- that as a poet, "Moi local is global" ). After the Babaylan Conference, I can see that it's time to draw aside the curtains to the lodge and let in the light... that it's time to create what I thought I'd do "some day" -- a physical space extending how my family moved to where we live to get back to the land. After the Babaylan Conference, I can see that it's time to make manifest that sculpture I've long seen-by-feeling its presence on the mountain: the tip of a shoulder and the face of a long-haired woman rising from the hilltop behind my writing lodge.

But even as the Babaylan danced with me -- and I do mean that literally, including with someone I would consider to be a modern-day Babaylan, Pearl Ubungen, with whom I did a poetry-dance collaboration for a book launch of the Babaylan anthology -- I didn't focus on the Babaylan's face: I didn't look into her eyes.

It wasn't until the Conference that I learned that the Babaylan long had ignored my indifference and continued looking at me, dancing with me even as I remained unmoved (Conference attendees might recall my inability to dance). Through the Conference, I discovered that I had been practicing "Babaylan poetics" all along (upcoming posts on poems will provide examples). But I did not learn the tools to label my poems and related activities as such, until I discovered these three publications through the Conference, whose importance include the means for theorizing (and some of us have learned the hard and heart's way, haven't we, that theory can be more empowering than, uh, boring):

KAPWA: THE SELF IN THE OTHER—WORLDVIEWS AND LIFESTYLES OF FILIPINO CULTURE-BEARERS by Katrin De Guia (Anvil Publishing, Pasig City, 2005)

I actually don't mind discovering the theory belatedly--in art, I believe theory comes after the making of the art. But now that my mind has been opened up, I also realize that the timing is perfect -- I needed to write what poems and poetry acts I've created to date before I could name my poetry practice with "Babaylan Poetics."***

Indeed, the above three books moved me to read once more--with more enlightened eyes than when I first read--decolonialism poet-scholar Leny Strobel's radiant book, A BOOK OF HER OWN: WORDS AND IMAGES TO HONOR THE BABAYLAN. Leny's own journey has been inspirational for my own.

It should be noted, by the way, that I am not calling myself a "Babaylan"; I am only practicing "Babaylan Poetics".

I think the acceptance of what I do as Babaylan Poetics is a turning point of sorts. I'm a prolific poet who just released my first Selected Poems Project and 18th poetry book, THE THORN ROSARY. What my publication record hides (partly because publication occurs with time lags from the initial writings) is how I've not been creating many poems for the past few years. I've long felt that what I'd created to date also has been preparation for something else. After the Babaylan Conference, I think I'm now ready to see what that something else will be.

This is my diary then towards something else. Perhaps you will join my dance to make it what it should be: our dance. If it needs to be said, this invitation is not just for Filipinos. Indigineity is not tribalism or nationalism. And we are all indigenous.

Hopefully you will help create Our Dance because the Poem cannot mature without you, Dear Reader. Another way to express my hope for your presence is this Haptic drawing that poet-artist-critic Jean Vengua created while she was listening to my presentation at the Babaylan Conference: 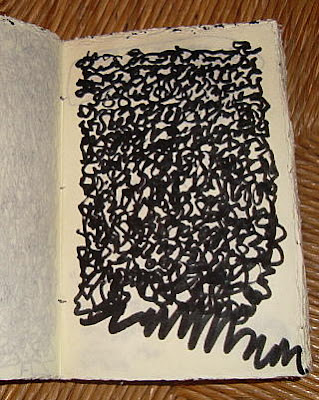 Thank you Jean. And what I most appreciate is clearly the open-ended nature of the drawing, how that line at the bottom of the page displays the energy to continue past the constraints of the page. Its life beyond the page results in the involvement of its audience (how the audience might see/interpret the image)--a metaphor for a poetics scaffolding for poems I desire to create. Interestingly, I think that Jean drew that line (please correct me if I'm wrong) in specific response to a performance I did during my presentation when I started ripping pages from a poetry book (NOTA BENE EISWEIN) to hand out to the audience. As I handed out the pages, I noted (from my presentation notes):

1) My poems don’t mature if they remain unread, if no one engages with them….so I give them to you.

2) Note that by tearing out pages, I am destroying a book. Well, yes, the publication is not important….the poem may be what’s printed on the page. But Poetry is not something trapped by a page; it’s an engagement involving others beyond its author.

3) When I give you pages, they may be fragments—say, incomplete excerpts of poems: that’s fine. A poem is inherently a fragment—it is began by the author, but it can only mature into wholeness if it’s engaged by a reader or its audience.

In Poetry, I cannot exist without You.

Though I've long believed in the above statement, it's only through the Babaylan Conference that I am finally able to identify this poetics as pure Kapwa***.


________
* I derive this from the title of SIMON J. ORTIZ: A POETIC LEGACY OF INDIGENOUS CONTINUANCE (Eds. Susan Berry Brill de Ramirez and Evelina Zuni Lucero, University of New Mexico Press, 2010) that I was synchronistically moved to begin reading the evening after I returned home from the Babaylan Conference.

** There's a significance to sensing the Babaylans' presence by specifically feeling their spirit. Probably relevant is something Grace Nono said during a Q&A period--that, as "not a Babaylan but a Babaylan-inspired artist" she serves to be the vessel for that same something that channeled their way into the oralists from whom she first learned in order to make her contemporary chants.

*** On May 7, 2010, I will be doing a presentation on "empire", including "communities" at Small Press Traffic, San Francisco. Much of this presentation will revolve around Babaylan Poetics. Naturally, You are invited!
Posted by EILEEN at 10:48 PM

Eileen, I am looking forward to what babaylan poetics brings about!

wow. that haptic sketch of jean's. it's frame worthy!

that that little dance you gave us across the front of the plenary hall for releasing ___ was quite a life-shaking indication of your new work and new life acts to be hatched and birthed in the Babaylan Lodge.

Yes, I have always felt a connection and the Kapwa of your poetry. I felt not only connected to you somehow, but to the Universe.

It was/is Babaylan poetics you have been practicing all along, as it was from you that I heard of "Poetry as a way of life". A poet writes what s/he reads (to paraphrase Annie Dillard) and engaging your poetics gave me a sense of freedom and healing I never thought possible--isn't this part of the Babaylan's role? :-) To greater things and more intricate dances, cheers!

Thanks again for posting the haptic, and for your thoughts about it. Not sure I can make it to your "empire and communities" talk, although for reasons you are aware of I have a strong interest in it. Would love to hear more about that...

Thanks Perla and Aileen!

Honored to have Annie Dillard cited here, and

...and, yes, the haptic is beautiful, isn't it! I should say that my interpretation of the visual image is my own, versus something intended by Jean. (I like to radically interpret visual images, e.g. my books MY ROMANCE and BEHIND THE BLUE CANVAS.) But I don't mean to speak for Jean and though she confirmed that the line related to the "rip" (I first typed "ripe") of pages, the results for her reflect nothing "intellectualized" (as my interpretation might be) and more just how my performance "touched" her. As Jean says, "literally haptics relate to touch), how they moved my hand."

More food for thought! As in how that touch resonates given blood memory :)
Eileen

I'm sure I speak for many when I say it's great to see you so engaged.

Is the dance to be something like a waltz or something by Abba? :)

Hi Paul,
I'm open to both. After all, the indigenized POV says both are Filipino (wink).

You better dance in the kitchen when you come to cook for Moi!
cheers,
Eileen

eileen - we need to take you to a kapwa jamming session and loosen up those dancing hips.
will post this blog on fb...

you better come to a kapwa jam session soon and loosen your dancing hips:-)))

Thanks Leny. I don't do Facebook but many of those lovely folks have long invited me in....please share that they also can talk to me here since this blog (unlike other blogs) allow comments!

Yes, I tear out poems from their
"birdcage" and let them fly into
my heart. Keeping the poem nearer
to my heart, in this way the poem
becomes a part of my memory.
So good to hear that you feel this
is a way to truly interact with
the poem.

Theory comes after the making of
art. This is true.

Thank you Cynthia. It's lovely and loving to have your lyrical presence here...