In an earlier post, I talked about returning to my studio, "Babaylan Lodge," after the Babaylan Conference. When I arrived there, I had to look around for a while as I'd forgotten what, over recent years, I'd stored there (until I returned, it was "out of sight, out of mind"). Looking at various spots and items now, I sense that the space had been patiently waiting for my return, patiently because I hadn't been ready at the time the structure was built to be located in it. Here are some interior shots -- some signs: 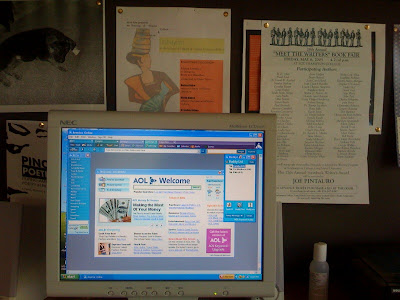 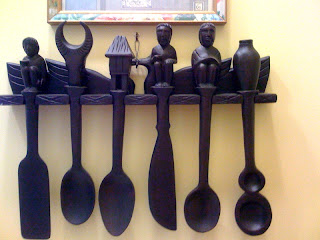 Barbies in search of decolonization. Talk about colonized--Mattel took over a former U.S Military Base in the Philippines to turn it into a factory, in which they made Barbies. I picked up these "Philippine Barbies" for a project exploring (post)colonialism while I was once at Manila Airport. They now grace the fireplace featuring a carved deer because deer a-bounds all over the mountain: 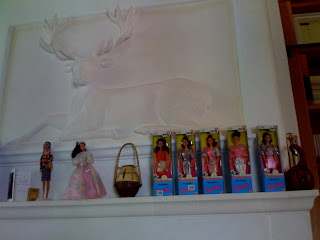 A decolonized Barbie (she's out of her box) sits on the trophy I received for the Manila Circle National Book Award in Poetry for Beyond Life Sentences. When one is decolonized, one enters Poetry. Here's the NBA trophy by Napoleon V. Abueva, considered the "Father of Modern Philippine Sculpture" and the youngest ever to receive the designation of Philippine National Artist. Nearby is a photograph of a Filipina dancer by brilliant photographer Rhett Pascual. You can also see hanging on the far wall a portrait V.C. Igarta did of me when I used to visit him in his New York studio: 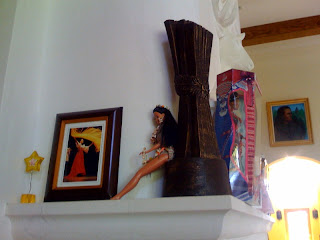 In 1999, I'd curated a reading by Filipino poets to commemorate the centennial anniversary of the Philippines' declaration of independence from Spanish colonialism. The reading took place at the Puffin Gallery in New York City which, for the occasion, was hung with works by Filipino artists in an exhibit entitled ""The Art of Resistance: Social Realists." I fell in love with this painting by Jose Tence Ruiz (scroll down link for more powerful images!)--the image of a blindfolded angel struggling to rise out of a garbage heap resonates for so many reasons: it's a metaphor for the Philippines' struggle for development...and for a poet's struggle...and for civilization to continue amidst horror....and I can go on and on about this work, but instead will just show the powerful image: 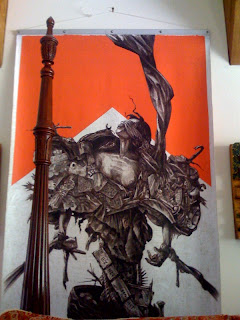 So many items of a past waiting for my return! Like, this wooden statue in front of a notice of a poetry reading I once did in Philadelphia (?) with that most excellent poet Ron Silliman. If I recall correctly, this woman's hair raised upwards into a cone upon learning of a lover's betrayal (?), and I always thought to offer her refuge...: 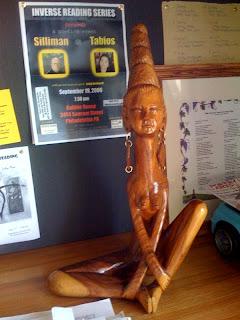 But of course -- a lady crafted from delicated Philippine shells. Beneath her, a wooden angel from New Mexico, I think, that was gifted by a former yoga teacher...I used to do a lot of yoga, which makes sense, as back in the day I was promiscous about what I let my mind pay attention to--so I think that angel is by some books exploring the philosophy of masochism or some such back-into-concrete idea that I was exploring in poetry...: 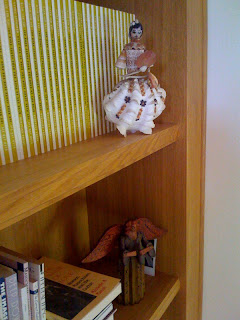 From the kitchen and looking out into the primary loft area, one can see the luminous Ganesh (from a trip to India): 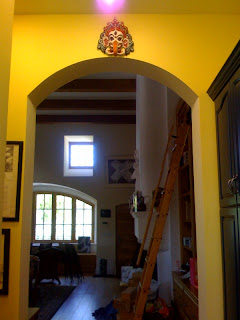 A Buddha head in front of the only CD anthology I've ever participated in, this one sponsored by Gargoyle magazine: 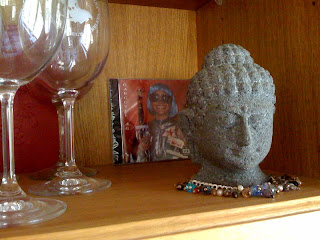 This bowed position has always -- still does -- move me. Atop some Nota Bene Eisweins: 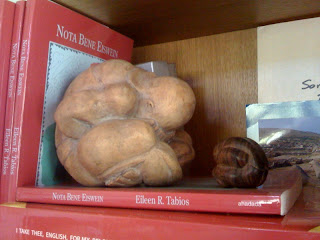 I once collaborated with June, a local artist, to create a glass mural of how I reconfigured the myth of Galatea (after whom my home is named). This was one of the paper drafts of the mural that would come to be placed on the wall of the wine cellar: 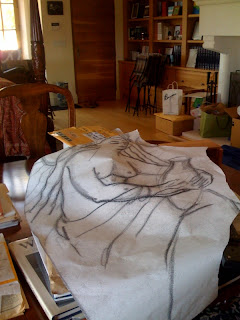 Birds carved from mushrooms atop bookshelves of books as "inventory" (partly from what I publish through Meritage Press): 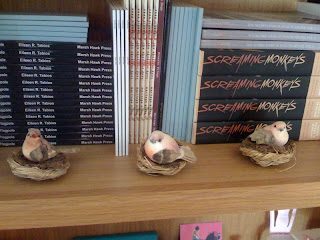 The bed doesn't really belong here. We moved in a bed so the lodge could be used as an occasional guest house as I'd not been using the space. 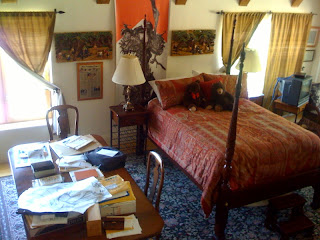 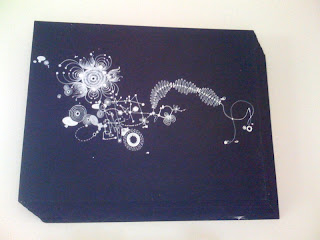 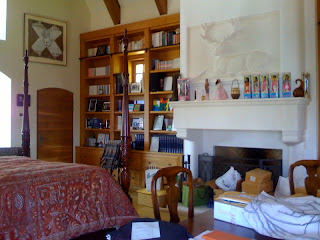 A drawing--"Queen Puso" (1993" by Corazon Ugalde-Yellen, a Pinay artist whose work I saw at an exhibit of emerging Filipino artists at the now-defunct Puro Arte Gallery in Los Angeles when I visited there to do a poetry reading. I've always appreciated how she stands in front of what I'd earlier thought of as 'the paradox of a blue but night sky." Now that I've learned about the indigenous "sacred time and sacred place", I realize that there's no paradox at all in that sky--it's just eternal for all time: 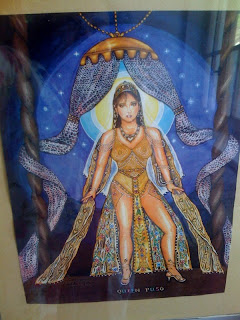 thank you for sharing the lodge, Eileen!!

You're welcome, Leny! Of course I'm not showing pictures of what happens with neglect--

Eileen, your taste is to cultural
& so specific your objects of art
become a learning experience.

I also have a small collection of
dolls of all cultural backgrounds.
What is of particular admiration is
how each of your doll exhibits
some form of strength.

A study of the philosophy of
masochism. Now that is seductively
interesting to me. Wow, have you
planted an idea in my mind.

Your Bulol spirits feed you - Yes.
My friend Anna says her poetry
feeds her - especially back in
her "broke" much younger days.

Thanks Cynthia. Hm! I hadn't thought that (consciously) about my strong dolls :-)

And I empathize with your friend Anna!

When the art object is a space of "learning experience", I suppose that's a tribute to their creators' strong conceptual underpinnings. The art in Babaylan Lodge is very specific to the "Babaylan" theme. But of course the spirit of interconnectedness has meant for me just attempting to be in touch with contemporary art developments as much as I can. So more art can be seen in a blog I'd set up for Mr. Insurance Man (sigh)--

thanks for yr interest!
Eileen