GALATEA RESURRECTS ... TOWARDS "SOMETHING ELSE"

Galatea Resurrects, the poetry review journal I edit, is another Kapwa-based project which began long before I focused on the word/concept "Kapwa." To date, and based solely on volunteerism by all participants involved -- and volunteerism is also known as "kusang loob" -- this site has presented 776 new poetry reviews (covering 343 publishers in 17 countries so far) and 64 reprinted reviews (to bring online a variety of reviews previously available only viz print).

The just-released 14th issue also contains my "first in a series of experimental engagements focused on gleaning indigenous Filipino traits in the poetry of Filipino poets located in the diaspora." My inaugural attempt at indigenous literary criticism focuses on three publications:

While this version is fine for Galatea Resurrects' purpose, it's a tad rough in places and over time I'll no doubt smoothen such. But what I did like about this article is how it ended--I didn't know how it was going to end, but I just plodded along to see what would happen as I wrote the longish article. And, with the help of the words of Acoma Pueblo poet Simon J. Ortiz, the article ends by noting the "moral imperative" to the making of interconnections:

Indigenization requires a lot of work (too much work to be "flakey", in my opinion). To "hear" in the above is to listen but also to act.

And so I was pleased at how this first attempt at an indigenized literary criticism ended up leading me to conclude that the point of the project ultimately is not the resultant essay. It is

something else, a something else that I now realize from writing this review, and without yet knowing its particular manifestations, is simply a better world.

Kapwa as "Shared Life"--including how all species co-exist harmoniously, like kitty Artemis and dawgie Achilles: 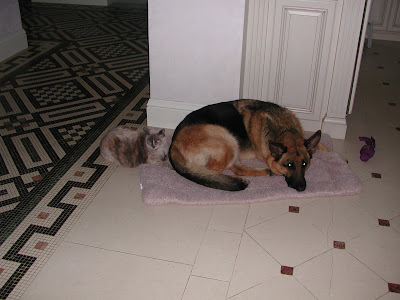 hey eileen, i wanted to thank you for your write-up on easter sunday. i really like what you say here, when engaging in indigenous literary criticism, you are getting a something else. i'm thinking about this, and how to write about it, for a poetics essay i'm supposed to be writing - thoughts on my blog are forthcoming.

Thanks (and you're welcome), Barbara.

This reminds me of how that journey to *something else* kind of touches on the "poetry vs poem" issue from an insular poetry-world. It's not a binary, of course -- in that mythic "sacred time and sacred place", there are no binaries and paradoxes. Poetry's been great training for that -- some fabulous poems are faboo specifically for suspending a multiplicity of (contradictory) terms like a juggler's colorful balls in the air concurrently.

My recent poems reflect the Conference's impact and, in one of them, I destroy a 20th century assumption through the talanhiga of noting, One can indeed paint an object in the middle of a fall...

Wow--I'm going on! I think it happened when I saw "poetics" in your comment!

Look forward to your write-up. Please do post a link here when it's online!