The Babaylan Conference was so inspiring for Mom that since that weekend, she's been writing memoir-ish stories. In a matter of weeks, she's written enough for a book! And it'll actually be a useful memoir for others outside the family since much of the vignettes have to do with life during World War II, and many of Mom's peers have died or are dying (Mom is 80 years old). I actually already have a publisher for her first short story--fittingly, it will be for OurOwnVoice's special issue on Babaylan Conference Reflections...

Mom actually suffered physically from the prolonged hours spent over the computer writing her memoirs. But it's not unusual for the act of creation to take a toll on the body, the artists' bodies. It'll be worth it, though. Mom agreed with my suggestion to make her book a two-part book. The first part will be her memoirs. The second part will be -- wait for it as it's HISTORIC! -- a reprint of her May 1954 Masters of Arts Degree in English from Silliman University. Mom's thesis was on "The Use of Local Color in Philippine Short Stories in English" -- the first critical study on this topic.

I'm looking at Mom's thesis right now as I type this post--it was approved by the "Graduate Council" chaired at the time by now-Philippine National Artist Edith Tiempo, and Council members were Metta J. Silliman and Philippine National Artist Edilberto Tiempo. (Mom had studied at Silliman University with the Tiempos, but before they set up the writers' program modeled after Iowa University's.) The pages are yellowing...browning....fragile.

It will be great to get this thesis out there!

And here's a picture of my mother Beatriz Tabios reading a copy of THE THORN ROSARY. She happened to be in the kitchen when my copies of the hardback versions were delivered. It's nice to see that she thought my book was worth interrupting her mending of dish towels (grin). 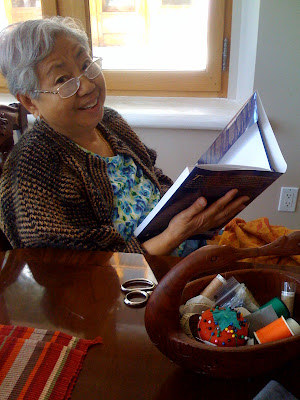 When my father died a few years ago, it was just short of his and Mom's 50th wedding anniversary. It's often said that the first year of widowhood is the most difficult, and for a couple that's been together for so long, it could be even more difficult. In a way, the writing has become a new source of invigoration for Mom, a reason to look forward instead of (what she usually does): look back into her memories.

She looks forward by looking back? Hey -- time just collapsed in that mythic "sacred time and sacred place" where creativity fluorishes! Woot! And it's all because, at the last minute and a tad bored around the house, she decided to attend the Conference with me. She loved it so much she returned for the second-day attendance. And, now, she's pouring out her own contribution to ... Light!
Posted by EILEEN at 11:01 PM

Manang Betty -- am looking forward to reading your memoir!! thank you for writing. you inspire me!

Congratulations! A memoir-thesis combination at 80 sounds very intriguing and very rich, definitely aging at its most graceful :-)

Great to hear this about your mom, and I look forward to reading her book. She looked like she was really enjoying the conference.

Thanks All. I'll pass on your good wishes to Mom....

....the one bad thing about her becoming a writer, and thus finally using the laptop that had been in her bedroom for a couple of years, is that I keep hearing her calling for me--that's Moi the Luddite, mind you--

when one of those boxes pop up from Windows saying some innocuous thing.

I got my Mom doing this, too, when she was widowed. To coax her, I promised a dollar for each page she wrote (cheap). She came out with reams of memoir which I was able to use for my own unfinished memoire. She was so productive, I thought it was less expensive for me to send her her usual stipend from Canada. She is 87 now, and lives in Poro Point near the beach (the jotting point celebrated by the late Filipino poet Alejandrino Hufana, a lamented mentor). More power to your Mom, and God bless.
ALBERT B. CASUGA
http://ambitsgambit.blogspot.com

Hi Albert,
Can you promise a dollar a page for my Mom, too, please?

....I checked your blog (and why aren't you sending me a review for _Galatea Resurrects_--hint! I can send you Filipino-authored poetry collections to review, if you wish!

nice to see you here!
Eileen

Ok, Eileen. Send me some and will review them for Galatea.
Good to know you guys are working hard to highlight poetry written by our people. Abrazo.
ALBERT

Albert,
Email me your snailmail addy please to

Thanks for the support...for GR and our poets!

Eileen, i am so excited for your Mom, and that there are new works and old works being taken out of the filing cabinet to be published! How wonderful to take on new things when in your 80s. I definitely want to be like that too.

Thanks Perla! Yes, the writing has given her a third, or fourth, or fifth life. I haven't seen her so engaged in ... decades!